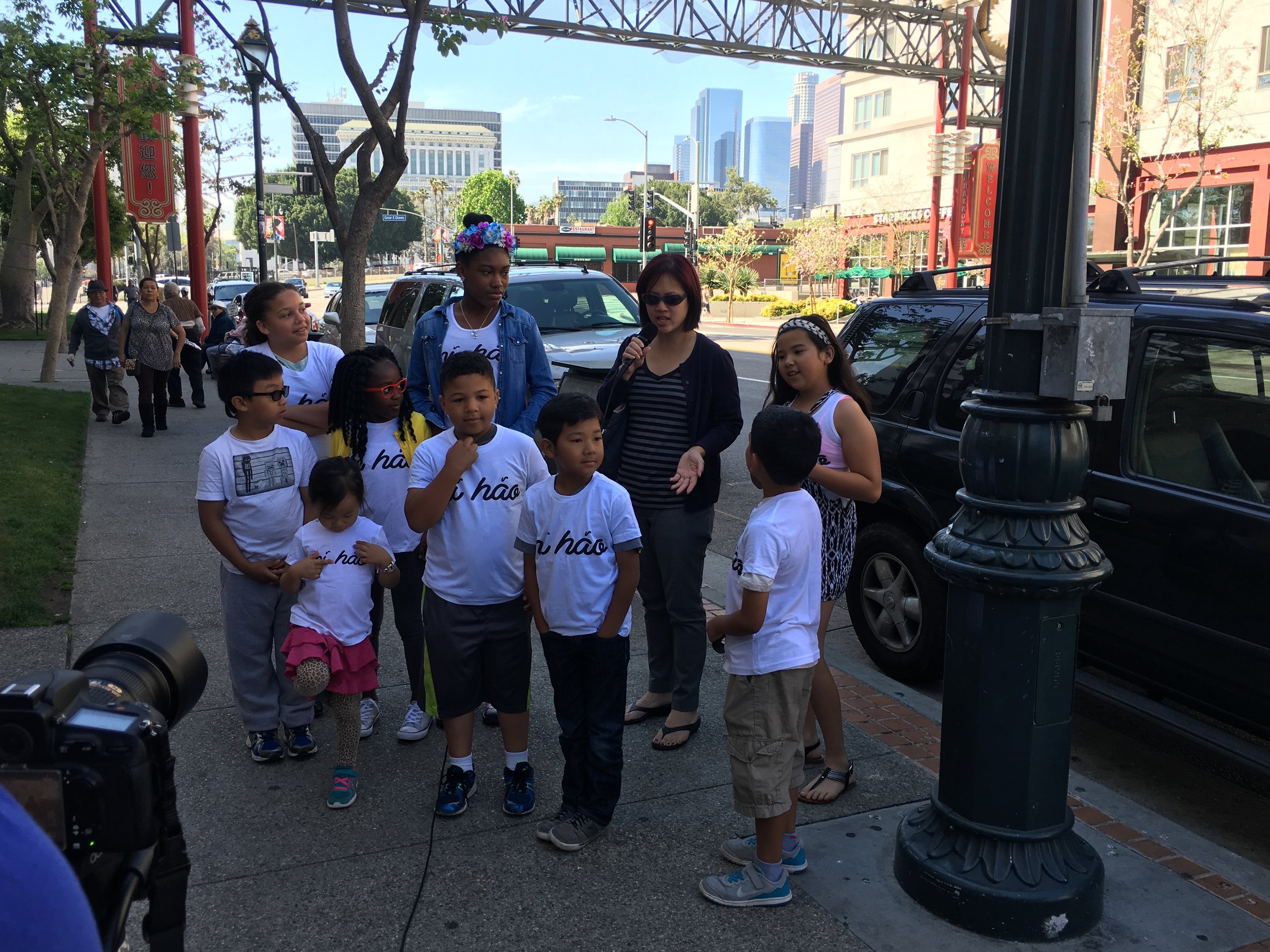 Mixed Up Clothing was proud to support our partner, The MultiCulti Corner, as they teach multicultural children about other cultures around Los Angeles.

On this beautiful day we were introduced to one of the country’s oldest and most historic Chinese enclaves by docent, Helen Hua of Undiscovered Chinatown.

We met at the entry into Chinatown which is highlighted by a large dragon above Hill St.

Helen explained that the Chinese immigrants moved into this area as early as 1852 and the first Chinese were mostly men. She went on to share that they were laborers doing work such as laundry, gardening, and building roads. There was heavy discrimination going around in the later part of the 19th century which led to The Chinese Exclusion Act in 1882.

We made a stop in Central Plaza, dedicated in 1938, which gives you a taste of true Chinese culture!

It was at this time that this area officially became the first modern American Chinatown.

Our next stop was the intricately designed Taoist Temple, Thien Hau Temple. It is one of the more popular areas for worship among Asian residents.

The temple is dedicated to Mazu, the goddess of the sea and patron saint to sailors and fishermen.

The children were excited to learn about the stone Fu dogs at the front entrance of the temple. Outside the temple is a ceremonial urn which was used by villagers to pray for good weather.

Also outside is a stone horse. The kids were excited to crawl under the horse as it is said that children who crawl under it are protected from harm.

The children gathered around to learn about the deities. They were allowed to burn incense which is used as part of the worship of the deities.

As we wandered the streets of this lively streets of Chinatown, we made a stop at the Chinese Historical Society.

After much walking, the kids were hungry. It didn’t help that we passed several bakeries, restaurants. Helen walked us to a restaurant where we joined locals and other tourists and ate dim sum.

After a few hours, we concluded our walking tour and exploration of this vibrant neighborhood full of variety and cultural activities.

Looking back at family history during the twentieth century, many might think of buying houses, starting a family business, buying estates that would pass...
Read more
Education

Dear reader, For some, Thanksgiving is mashed potatoes, pumpkin pie and turkey. For others, it’s just another monolith reminder of the Native American Genocide.  Elementary schools...
Read more
Community and Culture

Visuals such as protests, organizing, or calls for policy changes come to mind when one thinks about the racial justice movement. But, within this...
Read more
- Advertisment -