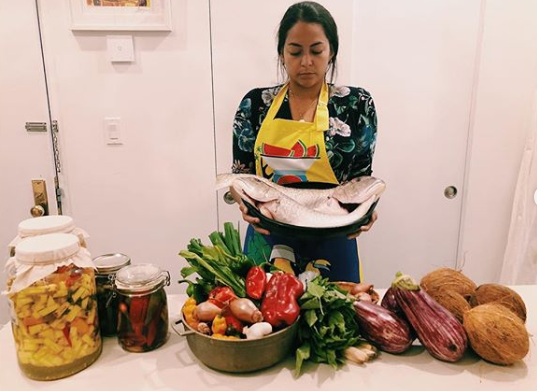 Colombia native Stephanie Bonnin had been living in NYC for a few years when she realized she’d somehow become her friends’ go-to resource for recipes that tasted like home. “All my Colombian friends here were constantly writing me and asking for recipes, saying ‘Oye como se hace un arroz con coco?’,” she laughs. But though she’d always loved to cook recipes from her home in Barranquilla, Bonnin never realized it would become more than a hobby until personal tragedy struck. In 2014, her father passed away, sending her into a depression that lasted two years. As she attempted to cope with her grief, she found that only cooking was able to bring her out of the fog and make her feel fully present in the moment. So, she decided to leave her previous career as a lawyer behind, and attend the Institute of Culinary Education, putting her on a path that soon found her cooking on the line in some of NYC’s most acclaimed fine-dining establishments, including Enrique Olvera’s famed Cosme.

Along the way, Bonnin realized that her true passion went beyond merely cooking – she wanted to use gastronomy as a way to help people connect with their cultural heritage and with one another. And thus, her project La TropiKitchen was born – a food blog and business focused on the ancestral gastronomic traditions of Latin American Caribbean regions. Below, we caught up with Stephanie to hear more about her journey to becoming a food entrepreneur, how she’s connecting people through cuisine, and what’s next for La TropiKitchen.

Read More by at Remezcla

Celebrate tequila without the Hollywood mark

Juiced from the blue agave, tequila is the liqor of choice for party-goers worldwide. Like Champagne whose authenticity depends on geography among other things,...
Read more
Community and Culture

Dave and Lois Cho are partners in love, life, and wine, launching their own wine label during the COVID-19 pandemic. Cho Wines is the...
Read more
- Advertisment -