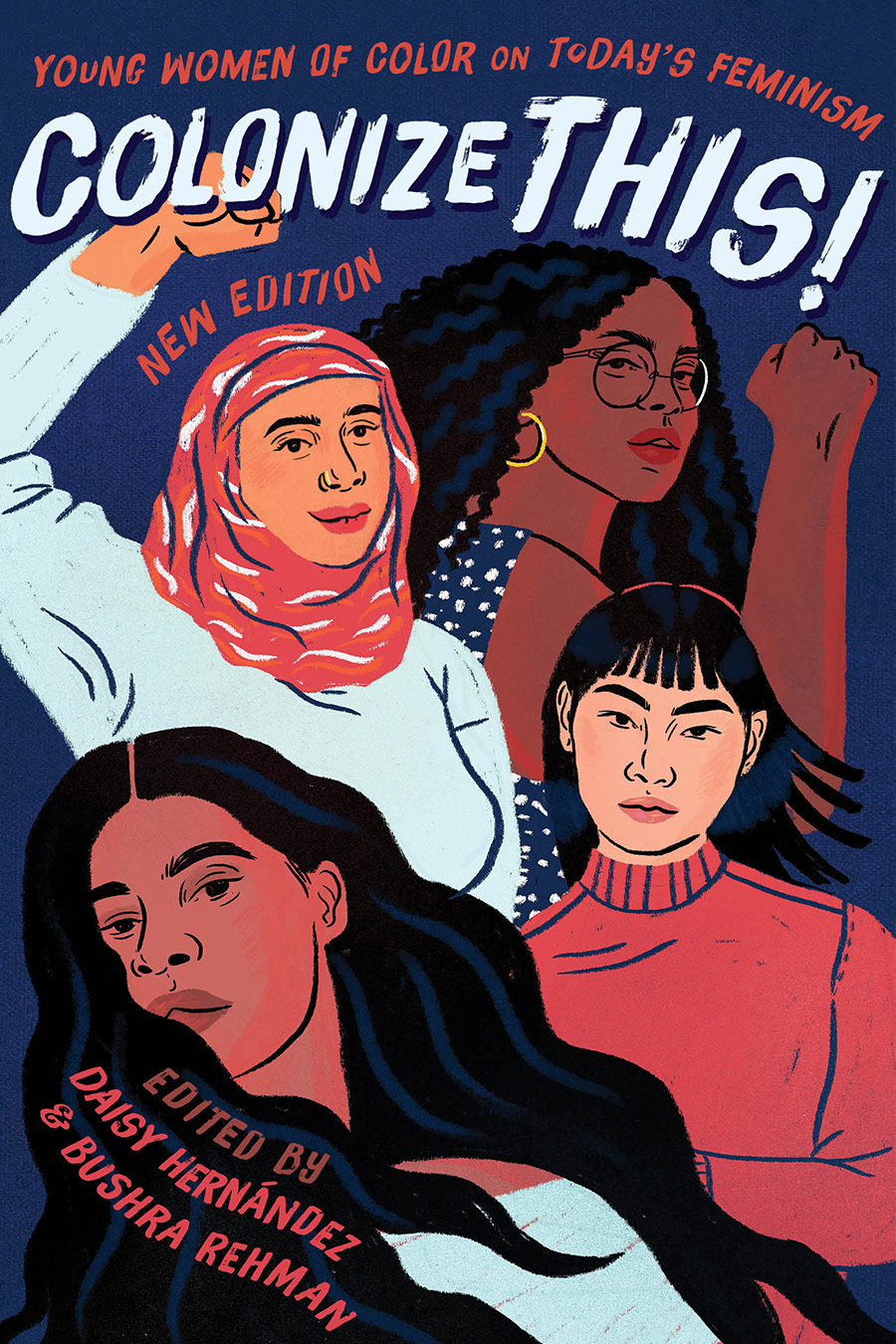 Join us for the book launch of the NEW edition of Colonize This! Young Women of Color on Today’s Feminism!

The NEW edition of Colonize This! Young Women of Color on Today’s Feminism! is a protest to the current political regime in our country. It is a response to the deportations of immigrant families, to the relentless killing of black people by police officers, and to the media outlets that describe the abuse of girls by old white men as ‘sexual encounters.’ This book, being as it is a gathering of young women of color sharing their experiences and intellectual insights, stands in defiance of what is happening in the courts, in Washington, and on the streets of our country.

The first edition of Colonize This! was released in 2002, in the aftermath of 9/11. It became an instant classic in women’s studies programs and a lodestar for a generation of Black, Asian, and Latinx activists. After the 2016 election and the chaos and destruction that has ensued, Hernández and Rehman realized it was time to bring the original voices in Colonize This! along with NEW voices from the next generation of young women of color back into the public discourse.

$5 SUGGESTED DONATION | OPEN TO THE PUBLIC

This edition includes nine new essayists, writing on topics from gun violence to trans motherhood; serving as an abortion doula, to organizing migrants; navigating call-out culture as a transgender Latina to challenging rape culture on campus. It is an empowering survey of feminism as practiced by women of color and a clarion call for the next generation. Join us to celebrate the writers in Colonize This! and our collective resistance. Come out to meet the new essayists along with original contributors and editors during this special evening at the Asian American Writers’ workshop.

Sayeeda Copeland is a native of Harlem, writer, and mother. Her poem “Pregnant with Haiti Prayer” won ‘Best of the Bronx’ in the 2010 Random House Creative Writing Contest. She has also participated in the National Council of Teachers of English in 2015. Currently residing in Bronx, New York, Sayeeda is a part of Las Raices, a writing group of women dedicated to bringing awareness to the cultural changes in the borough. In her spare time, she enjoys studying her favorite authors: James Baldwin, Langston Hughes, Maya Angelou, Toni Morrison and Sister Souljah. Sayeeda also enjoys writing memoirs and slave narratives – anything to bring awareness to African American history. She is currently working on creating her very own journal line in hopes of encouraging people to fall in love with writing like she has!

Sonia Guiñansaca is a queer, migrant, poet, cultural organizer, and activist from Harlem by way of Ecuador. Named as an “Up and Coming Latinx Poets You Need to Know” by Remezcla, she is the 2017/2018 Artist in Residence at Hemispheric Institute of Performance and Politics and is a U.S. Future Leaders Delegates for the British Council. She emerged as a national leader in the undocumented/migrant artistic and political communities, co-founding and helping to build some of the largest undocumented organizations in the country and coordinating and participating in groundbreaking actions. She founded some of the first creative artistic projects by and for undocumented writers/artists. Currently, she is the Managing Director of CultureStrike.

Jamilah King is a journalist who writes about race and gender. She’s currently the race and justice reporter at Mother Jones, and her work has previously appeared in The Washington Post, Mic, Colorlines and the California Sunday Magazine. She currently lives in Brooklyn.

Sandra Kumwong is a junior in the Macaulay Honors College at Hunter College, studying Sociology and minoring in Chemistry and Biology. She is a Health Educator and a Co-Coordinator for the Peer Health Exchange chapter at Hunter College, a former intern for Planned Parenthood of New York City, and a full-spectrum doula for The Doula Project. You can find her in a yoga studio, hiking New York, demonstrating how to use an internal condom, or waitressing. As a proud, vulgar daughter of Thai immigrants, she hopes to further health access for all people by taking the stigma and shame head-on.

Andrea L. Pino-Silva is a co-author of We Believe You: Survivors of Campus Sexual Assault Speak Out, and co-founder of the national survivor advocacy organization End Rape on Campus. She attended The University of North Carolina at Chapel Hill as a first-generation college student and was among the first survivors of campus sexual assault to publicly file a federal Title IX complaint. Her activism and personal journey is prominently featured in the 2015 Sundance film The Hunting Ground, and she appeared alongside Lady Gaga and 50 other survivors at the 2016 Academy Awards.

Almas Sayeed is an anti-poverty advocate, organizer, policy nerd, lawyer and writer based in Los Angeles.

Taigi Smith has been a full-time journalist for more than two decades. She is an award-winning television producer, writer, and mother. Her career has taken her to cult compounds, murder trials, and movie sets, with the highpoint of Taigi’s career being the time she spent in Thailand covering the deadly Tsunami of 2004. Taigi is the editor of Sometimes Rhythm, Sometimes Blues: Young African Americans on Love, Relationships, Sex, and the Search for Mr. Right, published by Seal Press. Taigi was born in Newark, New Jersey and raised in San Francisco. She attended Mills College in Oakland, California where she received her Bachelor of Arts degree in Communications. You can reach her @cgmTaigi.

Amber Taylor is a soft black girl from Columbus, Ohio. She recently graduated from Miami University in Oxford, Ohio where she studied creative writing and learned how to cook more than just scrambled eggs. When she isn’t reading, she enjoys watching Korean dramas and cartoons for kids. You can find her nonfiction at Crab Fat Magazine, The Blueshift Journal and Rigorous.

Daisy Hernández is the author of A Cup of Water Under My Bed and the former editor of Color Lines. She has written for The Atlantic, the New York Times, and NPR’s “All Things Considered,” and currently teaches creative writing at Miami University in Ohio. She is co-editor of Colonize This! Young Women of Color on Today’s Feminism.

Bushra Rehman is the author of the novel Corona, which was included in Poets & Writers Best Debut Fiction list, and the poetry collection Marianna’s Beauty Salon. Her work has been featured in the New York Times, Poets & Writers, and The Feminist Wire. She is co-editor of Colonize This! Young Women of Color on Today’s Feminism.

This event will be live-streamed on the Asian American Writers’ Facebook page.

NOTE ON ACCESSIBILITY
* The space is wheelchair accessible. No stairs. Direct elevator from ground floor to 6th floor.
* We strongly encourage all participants of the space/event to be scent-free.
If you all have any other specific questions about accessibility, please email Tiffany Le at tle@aaww.org with any questions on reserving priority seating.