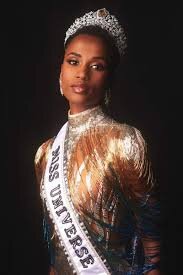 Meet the New Miss Universe 2019 – Zozibini Tunzi
The 26-year-old claimed the Miss Universe crown ahead of Miss Puerto Rico on Sunday after a grueling 3 hours.
Born in Tsolo on 18 September 1993, Tunzi was raised in the nearby village Sidwadweni in the Eastern Cape, Zozibini. She has 3 siblings and was born to parents Philiswa Nadapu and Lungisa Tunzi who are both educators.

Tunzi is a proud Xhosa woman who enjoys traditional African food, her favorite meal being umngqusho (a traditional Xhosa dish made from stamp mealies and sugar beans) with beef stew.

The public relations graduate is not new to the pageant world, she won Miss Mamelodi Sundowns in 2015. She also entered Miss SA twice, making it to the semi-finals in 2017 before she won the pageant in 2019.

Refusing to be discouraged by an early elimination, Tunzi gave the national beauty pageant another go in 2019. Her courage to try again paved the way for victory as Miss Universe 2019.

Tunzi wowed the judges with her natural stage presence and winning smile, as well as her proudly South African fashion creations. She becomes the third South African to wear the Miss Universe crown. The first was Margaret Gardiner in 1978, followed by Demi-Leigh Nel-Peters in 2017. This also makes her the first black South African woman to be Miss Universe.

Tunzi clinched the crown and millions of girls are carrying themselves that much higher with her win.

The coconut oil craze has lived and fazed out over time. While California and other places around the world prepare to hit our hottest...
Read more
Beauty and Style

Everybody is beautiful in their own way – that’s what we have always heard as a kid. But the ground reality is quite different....
Read more
Beauty and Style

I’m one of those moms who buys almost every single essential household item from Target. From baby wipes, to ice cream, to melatonin,...
Read more
- Advertisment -

Over the weekend, Netflix kicked off its release of classic Black sitcoms, hailing mostly from the ‘90s and early ‘00s. “Moesha” came to the...
Read more

The history of naval aviation began over 100 years ago. And now, after a century of technological...
Read more

Colorism is a full-circle problem for “Indian Matchmaking”

“Indian Matchmaking” is one of Netflix’s latest dating-centered reality shows. However, with its ties to a historical, cultural tradition, the show is a bit...
Read more

As part of our mission to uplift cultural diversity, we are kicking off Culturas Spotlight. The series highlights individuals who make their community a...
Read more
Load more